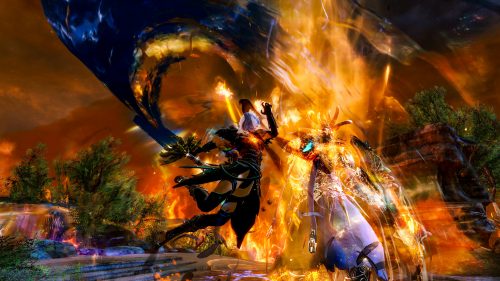 Qwallps.com – Add your game wallpapers by collecting this Guild Wars 2 4K Wallpaper. This is a cool wallpaper from the game Guild Wars 2 with a game screenshot of Fighting Balthazar. Balthazar was the second of the Six Gods to arrive in Tyria from the Mists. He is the god of war, fire, and challenge and is often associated with honor, valor, wolves, and hounds. Guild Wars 2 is one of The best MMOs and MMORPGs on PC in 2022. Guild Wars 2 is a free-to-play, massively multiplayer online role-playing game developed by ArenaNet and published by NCSoft. Three major expansion packs have been released for the game thus far; Heart of Thorns (2015), Path of Fire (2017), and End of Dragons (2022).

This wallpaper was designed in 4K 3840×2160 pixels resolution. You can set this wallpaper as your desktop background. Moreover, there are other awesome wallpapers with MMORPG game characters on this website. You can collect all game wallpapers by visiting the gallery below: